The news was immediately welcomed by Ukrainian President Volodymyr Zelensky. 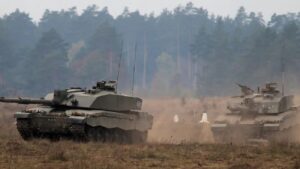 The United Kingdom will supply Ukraine with Challenger 2 tanks, becoming the first Western country to send heavy tanks to help kyiv against the Russian invasion, Downing Street announced in a statement on Saturday January 14.

During an interview with Ukrainian President Volodymyr Zelensky, British Prime Minister Rishi Sunak stressed “the UK’s willingness to step up its support to Ukraine, including by providing Challenger 2 tanks and artillery systems extra,” Downing Street said. London “will work actively with its allies to quickly provide an appropriate response to enable Ukraine to build on its advantage, win the war and secure a lasting peace,” the statement added.

Two demonstrators hanged in Iran, a 6-year-old boy opens fire in his school in the United States… around the world of info