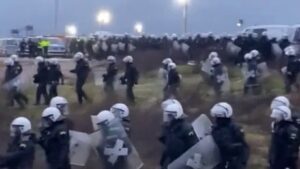 Hundreds of police are mobilized to dislodge environmental activists mobilized against the extension of a coal mine in Lutzerath. The bulldozers are already out to destroy the village. An operation that promises to be complicated, the situation is very tense between the police and the militants. The village has become a symbol, despite the promise of the Greens in the government coalition to phase out coal by 2030. The evacuation could last for weeks.

Hundreds of farmers in Valencia, Murcia and Andalusia are protesting against a European law to protect the Tagus. It forces them to limit their water intake from this river, even though it irrigates 70% of their crops. To save its agriculture, the government is considering a gradual implementation of the law. And provides alternatives, such as the desalination of seawater.

In the United Kingdom, justice gives the green light to the deportation of migrants in Rwanda