Strikes on Ukraine, explosion in Poland… Tuesday marks a turning point in the conflict between Russia and Ukraine. 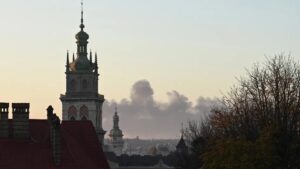 The city of Lviv (Ukraine), located near the border with Poland, was hit by Russian strikes on November 15, 2022. (AFP)

Will the conflict between Russia and Ukraine spread? The eyes are riveted on the village of Przewodow, located in Poland, very close to the border with Ukraine, where an explosion, Tuesday, November 15 in the evening, caused the death of two Polish citizens, according to the spokesman of the government, Piotr Muller. He also announced the strengthening of the alert level of “certain combat units” and “other uniformed personnel”.

According to the Polish Foreign Ministry, a “Russian-made missile” is the cause of the explosion, without however giving more information on the circumstances of the explosion. According to a press release from Lukasz Jasina, the ministry’s spokesman, the Russian ambassador was summoned for “detailed explanations”. This explosion occurred at the end of a particularly intense day in Ukraine.

An emergency meeting of NATO ambassadors organized on Wednesday

The explosion in Poland prompted NATO Secretary General Jens Stoltenberg to hold an “emergency meeting” on Wednesday with the ambassadors of the Alliance (of which Poland is a member), a door said on Tuesday evening. -speaker, Oana Lungescu. Earlier, the Polish head of state, Andrzej Duda, spoke with Jens Stoltenberg. The latter considered that it was “important that all the facts be established”. “NATO is monitoring the situation and the Allies are consulting closely,” he wrote on Twitter, offering his “condolences” for the deaths that took place on Polish soil.

While the Polish press announced that Russian missiles had hit the country, Russia described this information as “provocations” with “the aim of creating an escalation of the situation”. “No strikes were carried out on targets close to the Ukrainian-Polish border” by the Russian army, the Ministry of Defense said. The images of “debris published by the Polish media from the scene of the events in the locality of Przewodow have no connection” with Russian projectiles, he added.

Volodymyr Zelensky does not believe Moscow’s statements. The Ukrainian president called the Polish explosion “a very significant escalation”. “Today Russian missiles hit Poland, the territory of an allied country. People died,” he said in an address to the nation.

“A collective response to Russian actions must be tough and principled. Immediate actions include a NATO summit with Ukraine’s participation to craft new joint actions, which will force Russia to change course on escalation, and provide Ukraine with modern aircraft,” Foreign Minister Dmytro Kuleba said on Twitter.

Europe is closely monitoring the situation in Poland

European Council President Charles Michel said he was “shocked” by the “news” of deaths in Poland by “a missile or other” on Twitter on Tuesday evening. He announced that he would propose “a coordination meeting on Wednesday with EU leaders” present at the G20 in Bali, after speaking with Polish Prime Minister Mateusz Morawiecki, to whom he assured “unity and of total EU solidarity in support of Poland”.

Viktor Orban, Prime Minister of Hungary, neighboring Poland, for his part convened a defense council. On the French side, Emmanuel Macron “contacted the authorities” of the country and “keeps abreast of the situation”, the Elysee Palace told AFP on Tuesday evening. He asked to carry out the necessary checks in order to establish the facts in close consultation with Poland and its allies within NATO, according to a government source at AFP, who adds that France assures Poland of its solidarity

A telephone conversation between the Polish and American presidents

Polish President Andrzej Duda spoke on the phone with his American counterpart, Joe Biden, on Tuesday evening, Warsaw announced. Earlier in the evening, the US Department of Defense said it was “reviewing” press reports that two Russian missiles “hit a location in Poland or on the border with Ukraine”.

Many strikes in Ukraine

Russia fired “about 100” missiles at Ukraine on Tuesday, hitting 15 critical energy infrastructures in different regions, a Ukrainian air force spokesman said. These shots, more numerous than the 83 recorded on October 10, constitute “one of the most massive strikes since the beginning of the war”, he added. In total, several million Ukrainian homes were without electricity for part of the day before being reconnected to the network, Volodymyr Zelensky said on social networks.