The star had been sentenced to nine years in prison for “possession of narcotics”, a procedure deemed “bogus” by the United States. 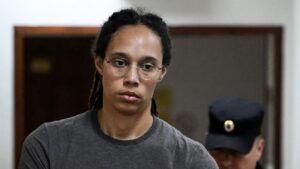 American basketball player Brittney Griner arrives at the court in Khimki, near Moscow, on August 4, 2022. (AFP)

Brittney Griner, American basketball star, was released by Russia on Thursday, December 8, during a prisoner exchange between Washington and Moscow. She is “safe” and “en route” to the United States, announced US President Joe Biden on Twitter.

The sportswoman had been imprisoned since February in Russia for “possession of narcotics“, a procedure deemed “bogus” by the United States. Brittney Griner was arrested at a Moscow airport in possession of a vaporizer containing cannabis oil-based liquid. She was sentenced in August to nine years in prison and then transferred to a prison in Mordovia (Russia) in November.