Since 2018, the number of migrants rescued by Italian NGOs has increased from 12% to 14%. Either a minimal difference, contrary to what the new Italian far-right government claims. 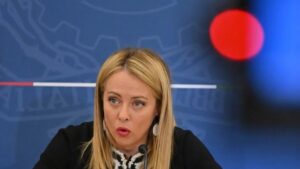 In Italy, the new far-right government of Giorgia Meloni is taking a hard line on immigration, but this posture does not stand up to the numbers. The role of NGOs in rescues at sea is minimal.

This year, according to figures from the Italian Interior Ministry, autonomous landings, that is to say from makeshift boats or ships that arrive directly on the Italian coasts, represent just over half of the arrivals. (53.2%). The others are rescued by third parties and most of the time by the Italian Coast Guard. Only 16% of the remaining half (46.8%) is collected by NGOs.

This trend is the same under the far right: if we compare the Salvini management, Minister of the Interior with therefore the far right already in power between 2018 and 2019, then the Lamorgese management which succeeded him, according to the Italian institute ISPI, which is an authority on migration, the number of migrants saved by NGOs increases from 12% to 14%, so the difference is minimal.

The firmness of the government is therefore all politics. However, note that Italy finds itself alone in managing this kind of crisis: this is what the Italian Foreign Minister will say on Monday, November 14 in Brussels, who wants to move the lines. On one point, it is possible to prove him right: the voluntary European relocation agreement does not work, again with supporting figures.

Thus, when shipwrecked people are picked up in a port, it takes an average of three to four months for them to be relocated elsewhere in Europe… if indeed they are. Because European countries do not push themselves to welcome them. For example, after the first agreement signed in Malta, between 2019 and 2021, 8,000 migrants were to be relocated: less than 1,000 were, in fact. It’s even worse after the second agreement last June: so far 112 have left Italy. There are 38 for France, 74 for Germany: the agreement nevertheless provides for 10,000 voluntary relocations this year.