A week ago, Sunday January 8, thousands of supporters of former President Jair Bolsonaro stormed the Presidential Palace, Congress and the Brazilian Supreme Court. The new government of President Lula is making every effort to identify those responsible. 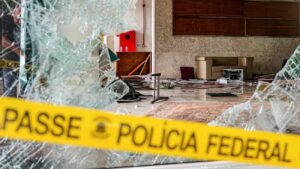 The premises of the Brazilian Supreme Court ransacked on January 8, 2023 in Brasilia (MAXPPP)

It is a gigantic investigative work that started Monday, January 9, while Brazil was still in shock from the images of this insurrection in the heart of the place of the Three Powers. A hundred agents of the federal scientific police meticulously collected all the fingerprints left by the assailants. This work has just been completed. At the same time, the authorities are also investigating the political leaders who were in charge of public security and those who are responsible for physically opposing this type of action, to prevent this violence.

Lula was categorical this week, in a meeting with the press: on all floors, major failures were noted. “There are a lot of accomplices,” he said. armed forces.” This is certainly the most sensitive subject for the new President Lula: the attitude of the security forces during the assault on the three buildings last Sunday. Because the new president will have to deal with the country’s security forces for four years, he will have to rely on them to govern calmly.

It’s gone very badly. Felipe Frazao, investigator and specialist in military matters, confirms that on January 8, nothing was initially done to stop the demonstrators: “There are many questions about the responsibility of the army which is in charge of the defense of the presidential palace. The battalion of the Presidential Guard deployed that day is insufficient. The units present were fewer than usual, members of the government have recognized this and this is the subject of a investigation. The military police forces were also undersized.”

“The public security planning was changed at the last minute, public security which was at that time under the direction of a former justice minister of Jair Bolsonaro! This man is now the subject of ‘an arrest warrant for his direct involvement or by omission in these events.

The man Felipe Frazao is talking about is Anderson Torres. He left the country 24 hours before the riots, heading for Orlando, Florida, where Jair Bolsonaro is also located.

The Brazilian public prosecutor’s office has just requested the opening of an investigation against Jair Bolsonaro. But all investigators’ efforts focused on Anderson Torres’ activities this week, and those efforts paid off: During a search of his home, a copy of a draft executive order was found, which planned to restore institutional order during the elections. In other words: to take over the powers of the electoral tribunal and invalidate the results of the elections. An initiative that the current Minister of Justice looks like an attempted coup. “If one day someone presents me with a document of this type, I would immediately ask for his detention, because this document attests to a criminal idea, explains Flavio Dino. It is a crime against the democratic rule of law. , so in my case I would not keep at home this kind of document relaying an idea of this nature.”

Anderson Torres communicates from Florida on Twitter, writing in his defense that he simply forgot to destroy this document, that he did not intend to use it. Brazilian justice has given him until the end of next week to surrender before requesting his extradition from the US government.

Some 1,500 people were arrested

Much of it is still in the hands of the federal police and several have already been brought to justice. Excerpts from their testimony have leaked to the press, and it’s quite amazing: all claim to have been financed, and among the organizers the name of “Ramiro the trucker” is circulating insistently, a close friend of Bolsonaro and the Brazilian transport unions . This man, the day after the insurrection posted a video from inside the gymnasium where the assailants were grouped in custody. “I am inside the premises of the federal police, where all our patriots who have been arrested are gathered, he says in this video. In this concentration camp, we are already living through Nazism. They are filed, sorted, and we don’t know when they will come out. And you who have done nothing to change Brazil, stop what you are doing, go out on the roads and do what you have to do! Those who are here are fighting for you!”

Their struggle was sponsored: bus, hotel, meals… All this obviously paid for by agribusiness entrepreneurs, pro-arms circles. Profiles on which the Brazilian justice is also looking.

Today News Post - December 31, 2022 0
The German pontiff, successor to John Paul II, marked the history of the Catholic Church by deciding to resign from his office eight years...