As the two nations face off in the quarter-finals of the competition on Saturday December 10 at 8 p.m., the fans are already in the mood for a match that promises to be thrilling. 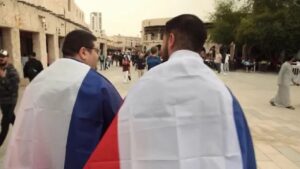 Giant screens already deployed, France is about to vibrate. A few hours before the quarter-final against England, impatience and stress are winning over some supporters. In this Parisian bar, everything has been planned for this decisive meeting. The large evening crowd is expected: “We are expecting around sixty people this evening, for the moment on reservation. After that it will surely increase, but I think we will be between 120 and 150”.

The England Most numerous

On the prognostic side, some are more timid, others more confident. In Doha, the fan game has already started. Among our England rivals, confidence reigns: “We are confident, I would say a 2-1 victory for England”. If the England songs resonate a little louder in Qatar, the French, for the moment more discreet, intend to compete at the time of the match. In the stadium, the England supporters should be more numerous for this unprecedented quarter-final between the two nations.

Germany: the video of the “disastrous” wishes of the Minister of Defense is controversial